After the one year hiatus

Has it really been over a year? The longest stretch I left my blog in the past was between its creation in 2005 way up until 2008. 2017 certainly left me nothing good to blog about. If I thought 2016 was an Annus horribilis, it had nothing on 2017 ...but we will not get into that. We just have to be optimistic about 2017 and take everything in our stride. 💓
Posted by Abena Serwaa at 6:29 PM 5 comments:

Farewell ode to the "Dead Goat" aka the uber-cool, dabbing President


Former President Mahama will not only be remembered for being the only President of the 4th Republic to be voted out after one term in office but also for being relatively young, vibrant, tech-savvy and having a whole lot of swag.

Another unforgettable trait of President Mahama is his skills in oration and communication. Who can forget the oratory gem he delivered to Ghanaians living in Botswana in March 2015? :


I have seen more demonstrations and strikes in my first two years. I don't think it can get worse. It is said that when you kill a goat and you frighten it with a knife, it doesn't fear the knife because it is dead already.......I have a dead goat syndrome

Goats may appear to be a strange animal for any analogy but in Ghana, we love our goats and what the former president was describing was how he was impervious to attack in what he termed having 'Dead Goat Syndrome'. Unfortunately for him, this statement seemed to shatter the thin line between being impervious and not caring.

Over the past few years, I have struggled to find the right description for former President Mahama's public demeanour. Finally, in a scathing article in November 2016, the Economist provided the word that made the most sense to me: 'insouciance'. 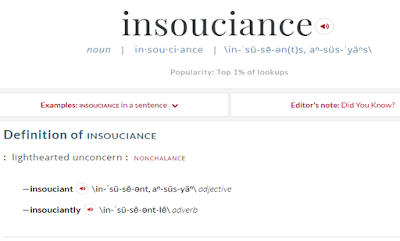 Sadly, I am sure the former President cared a great deal about governance and Ghana but his public persona over the length of his tenure did not always reflect this. State of the Nation addresses were mixed with laughter, jovial jibes and swipes at the opposition. These were very entertaining but showed a lack of some degree of gravitas.

In the end it appeared that describing himself as having 'Dead Goat Syndrome may have played a part in sounding his own political death knell. He told the people that he did not care about being attacked and he got punished for not caring enough....among other things. Former President Mahama's legacy is indeed mixed; his tenure will be remembered for impressive infrastructural achievements blended in with a plethora of corruption scandals. Regardless of where one stands, on January 7th we bade farewell to a well-spoken, warm President with a great sense of wit, charm and perhaps a not-so-presidential demeanour.

Change came to the B.A.D in the Annus Horribilis that was 2016

2016 will be remembered by children of the 80s as the year that saw the passing of many adored icons. There was Alan Rickman, David Bowie, Prince, Muhammad Ali, Gene Wilder, George Michael....just to name a few. There were other musical icons who passed on such as Glenn Frey of the Eagles, Leonard Cohen and of course the Kwaito legend Mandoza. The political surprises seen worldwide in 2016 were pretty spectacular. The conflict in Syria continued and became even more deadly as the year progressed. In early December, the Gambian strong man who has been in power since 1994 was beaten at the polls. Earlier in the year, the United Kingdom opted to leave the European Union which also coincided with the near-annihilation of the opposition Labour party through self-inflicted implosion. Later in the year, to the surprise of many, the US electoral college system voted to make Russia great again.

Over in the Beacon of African Democracy (the B.A.D), something quite unexpected happened. The opposition managed to beat the incumbent government at the polls without the need for a run-off election.

Some may attribute this electoral feat to the eerie trend in which Ghana has followed the US electoral direction since 1992. The trend is simple; when Democrats win the US Presidential election, the National Democratic Congress wins in Ghana and when Republicans win, the New Patriotic Party wins. There are also supposedly ideological parallels to this. This would make sense if the winner of the 2016 US election was in fact an established Republican as opposed to a Democrat turned Independent turned Republican. However, I digress....

One of the best explanation for why (the soon to be erstwhile) Mahama administration lost the presidential election in 2016 came from a stinging article published in The Economist in November entitled Nkrumah's Heirs. The article coincidentally also refers to Ghana as the Beacon  of African Democracy and was pretty harsh on both political parties. What they had to say about the ruling party was severe but pretty informative:

Patronage, uncontrolled expenditure, burgeoning public debt, insouciance on the part of the President, squandering of oil money, pot-holed roads and incessant power cuts were just some of the factors at play that decided the fate of Ghana's National Democratic Congress.

So there it is. Ghana will have Nana Addo Dankwa Akufo-Addo as President for the next 4 years. The effect of change has been interesting to witness. Many people appear delighted and some traders dropped prices in the market over Christmas. Cynics may view the latter move as a tad disingenuous...but that is just cynics. Throughout the land, there is an undeniable air of optimism, hope and NO space for complacency from Ghana's new leaders. The Ghanaian electorate has proven once again that it is powerful, discerning and unforgiving.

Abena Serwaa
Pro•cras•ti•na•tor: [\prə-ˈkras-tə-ˌnā-tər\] noun: a person who puts off intentionally the doing of something that should be done **** Merriam-Webster Dictionary****

Things Abena Serwaa Harps on About: